A question for you, Budleigh.

Have you considered giving a TED Talk? You’ve such an essential grasp of the issues and themes that trouble us all. Well, mostly dogs. But I’ve also picked up many useful tips from you. And frankly, you’ve more valuable advice to share than most TED talkers who drone on about saving the environment, or technology that solves world hunger, or extending life through emotional fulfilment. Yawn! We all just want to know the best tug-tug toys.

As a loyal reader, I urge you to expand your forum to the TED stage. The world would benefit. Plus, you’d look so adorable wearing one of those headset microphones!

Hoping to Manage Your Career, 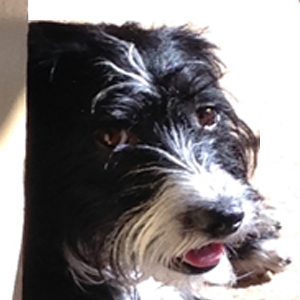 I’ve thought to give a TED talk. Especially in advance of the release of my self-help book, “How to Be Less Whatever It Is You Are and More Me.” But while I lecture extensively, and often to groups that are feral, TED might not be my ideal forum.

This is based on research by my intern, Per Se, who I assigned to investigate TED Talk requirements instead of his usual job separating Kibbles from Bits.

Look, I’m not a diva. The Bits are delicious; the Kibbles merely decorative.

Shockingly, TED speakers are required to follow – you’ll pardon the expression – rules. Rules! That’s so Giant. As a terrier, skirting rules is my raison d’être (French for “My teeth were here first!”) Imagine a world where everyone follows rules. Chaos! No, the opposite: Well behaved! That’s worse.

Consider the rule that a TED Talk run no longer than 18 minutes. Is that 18 Giant or Dog minutes? Regardless of the Canine Conversion Rate – which is something like one Giant year equals a furlong – I’ve a problem. When I speak to groups of animals, I tell them everything in two minutes. Then I repeat it because they weren’t listening. Add another minute for snarls – mine and the audience. Then autograph, autograph, autograph! Hand me the check. I’m outta there.

Other provisos Per Se found: TED Talkers should present the next big idea, have no political or religious agenda, and pitch no products or services from the stage. Outraged at these demands, I sought input from my fellow lecturers at the dog park before firing Per Se.

LABRADOR RETRIEVER: “Is retrieving a big idea? Or do I have to retrieve something…ya’ know…big?”

BURNESE MOUNTAIN DOG: (Breathless) “Like a mountain? I’ve a PowerPoint!”

IRISH WOLFHOUND: “Look, I’m not Irish. I’ve never seen a wolf. I’ve nothing to talk about. There’s been a terrible mistake!”

BUDLEIGH: “You don’t have to TED talk.”

IRISH WOLFHOUND: “They won’t ship me to a farm in the country?”

DACHSHUND: “Is digging a religious agenda? There’s something under the porch stoop. No one believes me. We need to prepare!”

CAIRN TERRIER: “I’ve smelled it, too! Only it’s behind the trellis in my Giant’s garden. Well, what was their garden. They didn’t believe me either.”

PUG: “After we nose through the garbage!”

BUDLEIGH: “Settle down, everyone. A TED Talk like that will only panic the Giants. Maybe get us shipped to a farm in the country.”

BUDLEIGH: “A successful TED Talk comes from the soul.”

DACHSHUND: “It’s that thing under the porch stoop.”

LABRADOR RETRIEVER: “Where do we start?”

BUDLEIGH: “By being open, honest, and asking yourself this: ‘How adorable would I be wearing one of those headset microphones?”

This site uses Akismet to reduce spam. Learn how your comment data is processed.

Here's what the cool dogs are talking about: