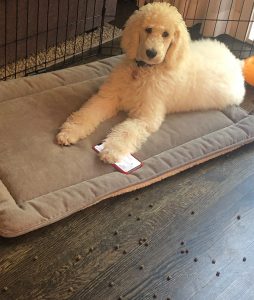 Zoe, our new poodle, has a problem. Or maybe I have a problem. Or Society. The thing is, Zoe keeps stealing my cell phone and snuggling with it on her bed. She’s not making calls. I checked the phone bill. Also, as you can see in the photo, when she takes my phone she surrounds her bed with her dried dog food bits. What’s that all about? She doesn’t act threatened or fearful. If anything, she seems a bit surprised that I want the phone back.

Guidance would be appreciated, Budleigh. And preferably soon. I’ve a super important Zoom meeting today at 4pm. I really need that phone!

Zoe is just playing a game with you. A dark and dangerous game. But before we explore that, and possibly recommend martial arts training, let’s better understand this behavior that Giants call “stealing” and Canines define as “adding to my permanent on-loan collection.”

Some breeds are naturally inclined to liberate objects technically not their own. In addition to Retrievers, these Canines include:

But all dogs take things. Why? Because Giants have all the cool stuff. Had both species access to quality goods at affordable prices, an equitable barter system would have evolved from the moment Ancient Wolf first nicked an Ancient Barbecued Pork Chop off the Ancient Countertop of Ancient Giant.

Food, of course, tops the Canine list of Most-Confiscated-Items-Left-Too-Close-To-The-Table’s-Edge. As a professionally licensed Canine, I can’t advice Giants on how to safeguard their food because all the other dogs would hurt me.

In addition to food, Canines are keen to emancipate clothing: socks, underwear, shoes, casual evening wear, even coats up to a men’s size 46 long. The attraction is their Giant’s odor, which is pleasing, and their lack of style, which is embarrassing.

But mostly Canines crave toys, which they define as everything not food or clothing. And preferably with a knot in the middle.

Caryn, I understand your concern, perhaps even guilt over Zoe’s behavior. But let me assure you that yes, it’s all your fault. And I mean that in a positive, supportive way. As a Giant, you have one job, Caryn. One job! That is to anticipate Zoe’s every need, indulge her every whim, and provide her every amusement.

Is that more than one job? I don’t do math.

I sense that the lines of communication between you and Zoe have broken down. These are easy to repair unless you have Comcast. Let me suggest a role-playing exercise in which I’ll play Zoe, and you, the part of every Giant in existence.

GIANT CARYN: “Zoe, dearest, have you once again appropriated my cell phone? Although this disturbs me on several levels, I’m sure that your intentions were honorable and that somehow, this is my own doing.”

GIANT CARYN: “Perhaps in my typical Giant naiveté I am neglecting your needs, sweet Zoe. Perhaps in your adorable, almost primal way, the procurement of my mobile device speaks to your perceived sense of alienation?”

GIANT CARYN: “As I approach to retrieve my cellular device, my darling Zoe, I note that you have strewn your dry dog food hither and yon. I can only say I am confused and ‘Ewwwww!’”

ZOE: “When they crunch, I know you’re coming.”

GIANT CARYN: “Thank you, wise Zoe, for so cheerfully relinquishing my wireless communications mechanism. Can I provide you with anything that will further amuse and entertain you?”

Had enough of Budleigh and his Giants? No? Then check out our new book, Sleeping between Giants, Book I: Budleigh, the Early Year.

5 thoughts on “Ask a Terrier: Don’t Hold the Phone!”

This site uses Akismet to reduce spam. Learn how your comment data is processed.

Here's what the cool dogs are talking about: